Copyright, All Rights Reserved. All content on this site is copyrighted, Dana Worley, as of the date of posting. Reuse or redistribution of this content is strictly prohibited without express written permission of the author.

I quite often see the question asked of how to successfully cut circles. The glass manufacturer, Spectrum Glass, has an excellent tutorial on their web site featuring Patty Gray on how to cut rims and circles. Some people, however, still struggle with using this method, especially on opal glass. I'll admit that I'm a little squeamish about running my bare fingers along the back of a score line. It just seems like a Bad Idea and a sure road to Band-Aids. I am rarely successful running the score using the opposite end of my running pliers or cutter. I guess it is  my squeamishness and inability to use tools that led me to a slightly different method for cutting circles.

First, start with a good circle cutter. I absolutely LOVE my Bohle Silberschnitt cutter. I joke with my husband (who's German), that every time I use it I want to kiss a German. You can certainly cut circles freehand, but to easily cut precision circles that require no clean-up of edges, a circle cutter is the way to go (and Silberschnitt makes some of the best). Also, I think my method of cutting circles works best with Ringstar running pliers, since you can put the little "bump" of the pliers directly under the score to run it, and, at any angle (I love my Silberschnitt running pliers, but for running circles, I prefer the Ringstars).

Consider the size of the circle that you want to cut, and cut a square of glass that is approximately 0.5 to 1 inch larger than your circle on all four sides. If you want a 10 inch circle, cut the glass about 11 to 11.5 inches square. The trick to the size of the square is that you want the distance from the edge of the glass to the score line to be narrow enough that you can reach the score line with your running pliers, but not so narrow that the score runs to the outside edge of the glass when running the score (sounds complicated, but you'll get the idea once you cut a few).

The old saying goes that a picture is worth a thousand words, so here's the step-by-step instructions, with a picture.

Bullseye has a free tutorial on cutting glass http://www.bullseyeglass.com/education/glass-cutting.html

Posted by Jesters Baubles at 9:32 AM 4 comments:

One of the questions that is often asked in the fused glass world is, "How do I get the back of my glass smooth?" When glass softens, it picks up the texture of whatever it's against. That texture might be from shelf paper or kiln wash, or even the texture of a smooth stainless steel mold. Thus, the qualities of glass that make it so versatile also cause some of its problems.

Rather than fight this problem, why not use it to your advantage? Paul Tarlow has published a great little ebook that teaches several methods for using texture in design of bowls. The book is called, "Beautiful Bowl Backs" and it can be found at http://fusedglassbooks.com/.

A few months back I had a chance to read the book and try out some of the methods. Here are some of the results of my "beautiful bowl backs". (The other problem glass artists face is photography, so please excuse the poor photos!)

The method used on this bowl back uses mica to create texture and shimmer. It's the back of the blue bowl pictured above:

I used a similar method on this bowl. Mica was also used on top of the bowl to give the piece a nice shimmer (I named it "Silver Lining" and it's currently residing in our local artists' co-op).

This bowl uses a method of kiln-carving for the back design. The piece was laid out in an 8" "Patty Gray Dam mold", which meant cold-working was minimal. I'm partial to the bold, clean design and strong contrasting colors, so this one is my favorite of the bowls. (I added small bump-ons to provide better stability.)


And finally, one more bowl using kiln-carved design. The bottom of this bowl was cold-worked so it will sit flatly. The top is a black fusers reserve (Spectrum System 96 glass) with Flexi-glass mica chips.


These are just a couple of the ideas covered in the Beautiful Bowl Backs ebook for using texture to your advantage in your fused glass art. Maybe it will get your ideas flowing on how you can work with the properties of glass to its full advantage. 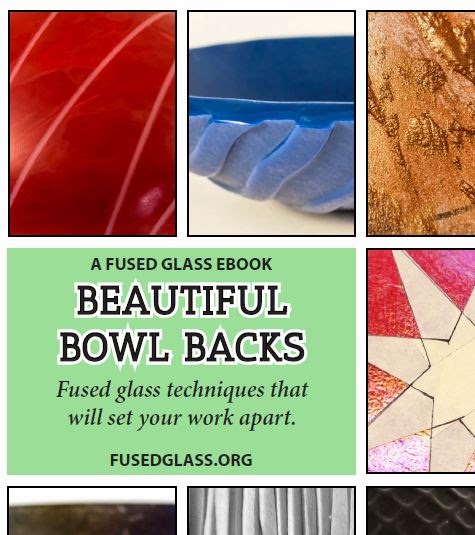 Flexi-glass can be found at Fusion Headquarters: http://www.fusionheadquarters.com/Flexi_Glass_s/255.htm
Posted by Jesters Baubles at 9:20 PM No comments: